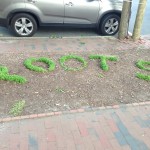 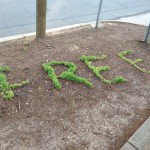 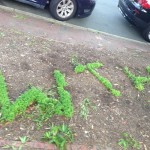 A new sustainable interior wall at Longwood Gardens in Pennsylvania has plants growing from floor to ceiling.  Called The Green Wall, the walls were designed to resemble a lush, green jungle and are 14 feet high and 300 feet long making it the largest green wall in North America.

The walls were developed by GSky and are comprised of 47,000 plants. The space has a greenhouse roof, and the walls are able to eliminate about 15,500 pounds of toxins and dust from the air within its location of the East Conservatory Plaza.  The walls are self-irrigated, and are a example of a sustainable interior.

If you want to check the walls out for yourself, head to the Longwood Gardens in Kennett Square, Pennsylvania.
Images and Links:

I recently got an update from Kulturlabor Trial & Error, a upcycling group from Berlin that I met at the Pixelache conference in May. Recently, the group did a project of doing moss graffiti, which has become a public art form, eco graffiti form, and a method for greening up walls and urban spaces. Moss absorbs large amounts of carbon dioxide, so in theory putting more moss in the world can help clean up the atmosphere.

To do moss graffiti, a natural “paint” can be applied which is made by using ingredients that include yogurt, sugar and beer.  The weather conditions, and location will affect the success of the moss growing.  Moss grows best in damp conditions.

To make the “paint” you mix up some clumps of moss, yogurt or buttermilk and sugar in a blender.  You then use a brush and stencil or paint freehand on the wall.  Every couple of days, reapply the mixture, and also spritz the area with water to encourage growth.

After a week, the moss will start to establish itself on the wall.  It will take about a month for the moss to fully grow.

Got a wall or space that you think needs a little lite?  Put some moss on it!  Some of the links below have directions to get you started.

I have this idea that in the future I will have time for another creative activity – making terrariums.  Terariums have been on the rise lately, with glass bubble containers, the use of upcycled/thrifted objects, and sweet small worlds of plants being seen in flower shops and garden stores.  Often the plants are succulents, cacti, and other plants that do not require much water.

Where did terrariums start?  The history goes back to Victorian times when people were really into ferns.   Women had extra time on their hand so they had hobbies that included making crafts, sewing, and collecting ferns. Fern collecting was seen as a serious pastime, and both men women would participate.

In 1827, Dr. Nathaniel Ward, a doctor in London was studying moths and caterpillars.  He found that some plants, including a fern,  had grown in the bottom of the jar.  This fern was healthier than the ferns in his backyard that grew in the polluted air from the local factories.

Ward discovered that plants could grow in London if they could be protected from the outside air. He created  miniature greenhouses, which he named fern cases. Today they are known as Wardian cases or terrariums.

The cases led to new plants being to be grown, including tropical and more exotic plants.   It also led to fancier cases.  In the 1860s, most Victorian houses had at least one terrarium.

Today terrariums function as fun, decorative containers that have plants that usually thrive without much care.  Some interesting studios that make interesting terrariums include  Twig Terrariums and Sprout Home.

Right now I am more in a fixing up the house/ cleaning things up mode – but I have big plans to make some small plant worlds myself in the future.

Video – How to Make a Terrarium – by Sproutm

Nance Klehm does work in the area of land politics and land fertility.  She is an ecological systems designer, landscaper, horticultural consultant, and permacultural grower, speaker, and teacher

One of her ongoing projects is the public seed archive based in Chicago, which started in 1993.   The seed archive allows anyone to borrow seeds to grow plants, as long as you send back double what you receive. The seed archive  library includes many medicinal, herbal, and food varieties.

The seeds are carefully stored, and Klehm’s interest especially in seed that is for food or medicinals, habitat creating as well as soil building. The archive only accepts, stores and loans viable, well-identified seeds.  Some of the seeds come from older heirloom varieties that have been grown and handed down for centuries.  Over the years her personal collection has grown into a cataloged library of over 350 varieties of seeds, with a focus on foods of the Americas with many  corn, beans, squash seeds.

There is a searchable database that you can review, and anyone can ask for seeds as long as you give back twice as much.   Occasionally there is a  ‘swap n’ store’ event, which is a event where individuals come together to share stories, process seed, ask questions, share stories and food, swap seeds and donate seeds to the archive.   The ‘swap n’ share’ happens 4 times a year.

Interested in getting involved in the seed archive?  You can send an e-mail to nettlesting@yahoo.com to get more information.  Klehm’s workshops are listed on her site which is located at spontaneousvegetation.net

Article about the Seed Archive – www.otherworldsarepossible.org